You are using an out of date browser. It may not display this or other websites correctly.
You should upgrade or use an alternative browser.
Welcome to our Swinging Community
Join now to meet other like-minded swingers.
Sign up
T 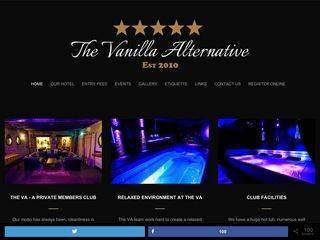 The Vanilla Alternative
The VA team work hard to create a relaxed friendly venue, that welcomes everyone. We are always on hand for a chat or to settle new members nerves or to answer any queries. Come and join us at our fully licensed bar for a drink.


The Vanilla Alternative, an entirely new and exciting experience that adults across the UK are flocking to experience.

With our huge hot tub, open and private play areas, fully licensed bar, our own hotel and gorgeous decor, you'll see why more and more swingers are choosing to become members at The Vanilla Alternative.
Reactions: mfcple, Pearls and Admin

Having been a member for 4 years and visiting most Fridays, The Vanilla Alternative is almost my second home. The club attracts nice people of all ages, shapes and backgrounds, all intent in having some fun in a wonderful clean and safe environment. The massive hot tub is a great addition to the bar and lounge areas for socialising whilst the choice of play areas allows for completely open or more secluded fun. Party nights on Fridays and Saturdays are always good fun with the option of staying over in one of the 12 onsite hotel rooms (ideal if having a few drinks from the well stocked licensed bar).
Reactions: Abercrombie, Ricky, TheVA and 2 others
R

@Ricky So Glad you had a good time And look forward to seeing you again... Did you try the Tequila?
Reactions: Pearls, Ricky and Admin
R

No tequila lol
Our hotel was miles away but worth the travel x
Reactions: Pearls and TheVA
R

Just love the refurbished snug. Well done for all the hard work over the past week.
Reactions: TheVA and Admin
N

We have been members at VA for nearly 2 years now & enjoy every time we visit it, brilliant venue with brilliant staff and a huge hottub.
NigelandJulie
Reactions: TheVA, Pearls and Admin

Its the best looking venue I have seen by far xx
Reactions: Admin

Agreed, stunning and we can't wait to get down there to finally see the club and see everyone again. x
Reactions: Pearls
T

NigelandJulie said:
We have been members at VA for nearly 2 years now & enjoy every time we visit it, brilliant venue with brilliant staff and a huge hottub.
NigelandJulie
Click to expand...

Went for our first visit last month for the back to school event.
Fabulous venue, spotless, superb crowd with majority making the effort. Loved the bar area and play areas alike, well worth the
distance for us and will be visiting again soon, but perhaps with an overnight stay this time.
Reactions: TheVA, Pearls and Admin

A busy weekend coming up with the club decorated for Halloween. First there is Frisky Friday and then on Saturday night it's the Halloween Party with music provided by the club's resident DJ Mark Eldridge. All the onsite hotel rooms are fully booked and the local hotels are also getting plenty of enquiries. Although fancy dress is optional, many of the visitors and staff will be making an effort to support the Halloween theme.
Reactions: Admin

Wow. What a night the Halloween party was. The majority of visitors in fancy dress with much thought having been used to produce some amazing costumes. Resident DJ Mark Eldridge playing great sounds to keep the extended dance floor busy all night. The onsite hotel and club car park both completely full, and lots and lots of very sexy people filling the bar, snug, hot tub and play areas.
Reactions: Admin

Steed99 said:
Wow. What a night the Halloween party was. The majority of visitors in fancy dress with much thought having been used to produce some amazing costumes. Resident DJ Mark Eldridge playing great sounds to keep the extended dance floor busy all night. The onsite hotel and club car park both completely full, and lots and lots of very sexy people filling the bar, snug, hot tub and play areas.
Click to expand...

That sounds fantastic indeed. Glad to hear it was a busy night and with good people putting the effort in.. Sounds brilliant..

Something a little different for Frisky Friday tomorrow. SpicyMinx has organised a bi night and it looks like being very popular with lots of new visitors in the club. It's always nice to ring the changes, especially when it involves another section of this wonderful lifestyle we all enjoy.
Reactions: Pearls and Admin

Certainly was another very busy night at VA's. Spicy's first bi night was well supported and wonderful to see so many people in the club on a Friday. The human buffet drew a lot of attention. Lots of VA first timers, so hope to see many of them again. The whole VA team were out in force and worked wonders to keep everything running smoothly.
Reactions: SarahD72, Pearls and Admin

So it's back to the regular Saturday 'Tantalise' tonight. All the 12 on-site hotel rooms are booked and plenty of people have indicated they are venturing out despite this wet and windy but amazingly mild November weather. The fun starts at 8 and goes on till the early hours.
Reactions: Pearls

Friday again, so it's a few hours work at the day job and then back to the wonderful VA's for more fun and frolics. Looks like being a busy weekend with Frisky Friday tonight (no one is going to be unlucky even if it is Friday 13th!) and then Tantalise tomorrow (Saturday). The grapevine tells me that people are coming from far and wide to enjoy the delights of this upmarket establishment.

As expected, another busy weekend on both party nights. Wonderful to see many first time VA visitors from all over the country. Last week, the car park foliage received a severe pruning, so what was already an extensive area is now able to hold a few more cars, something we found out was much needed on the club's two recent very busy nights, Halloween and the Frisky Friday Bi Night.

This week the wonderful and massive VA hot tub receives a further upgrade (excuse the pun!). The new seats fitted earlier in the year ended up a little lower than expected but it resulted in a good excuse for shorter visitors to sit on someone else's lap! Hopefully by Friday, the upgraded higher seats will be in place although it's been standing room only on several occasions recently which has resulted in many interesting encounters.

It's getting to feel a bit like Christmas, well maybe if you are out shopping. This year the club is opening up on Boxing Day due to popular demand. Times will be as they are for a normal Saturday night party 8.00 to 2.00 (or maybe later if there are enough people enjoying themselves). So if you feel you will have had enough of the stuffed turkey and want a break from the family for a few hours, plan now to join us for something a little different on Boxing Day.

Time again for a VA update. A really good turn out for Tantalise last night with over 100 wonderful and sexy visitors making full use of this great club. Our resident DJ, Mark Eldridge, kept the dance floor busy, and yet another human buffet provided some extra excitement. The new hot tub seats have been installed along with extra LED underwater lights and this part of the club seemed to be particularly attractive to last night's visitors.

This coming week sees the club opening at 7pm on Friday (an hour earlier than usual) to allow any single ladies an opportunity to see the club and meet with the female members of the staff team before other visitors arrive. Research indicates that there are single ladies that would like to join in with the fun but are very apprehensive about a first time visit. Hopefully the chance to see the club and talk with other ladies will calm their nerves somewhat.

Finally, there are only 8 days left to pre-buy tickets for the New Year's Eve Masquerade Ball after which, they will only be available on the door and £20 more expensive.
Reactions: EmmettFTM and Admin

With this weekend's events, that were both well attended, behind us now, we start looking at the start of the busy Christmas festive season. Firstly, a final reminder that tomorrow (30th November) is the last day to pre-order tickets for the New Year's Eve Masquerade Ball. After that, tickets will only be available on the door but £20 more expensive.

On Wednesday evening it's Twisted Eden again from 6 to 12. A fetish event that is growing in popularity each month. Also a timely reminder about the Black Cat Christmas Munch from 12 to 8 on Sunday 13th December. This event is looking good and I'm personally looking forward to meeting some of the Twisted Eden regulars. Tickets for this event must be pre-booked so we know how many to cater for.

Friday sees SpicyMinx's Frisky Friday Bi-Night number 2. Lots of interest following the first event that attracted over 160 people from all over the country. Really lovely to see lots of new people visiting VA's for this special evening.

As usual, on Saturday it's the regular Tantalise Party Night but with all the Christmas decorations in place it will give a really good start to the festive celebrations. (It's also my birthday but we won't mention that!).

Apart from all this I gather people will be crawling about on the floor (nothing unusual at VA's I here you say) but this is all about laying some new carpet to spruce the club up. So lot's going on and much more to come on the lead up to Christmas.
Reactions: Spicyminx and Admin

From what I hear, @Spicyminx Bi-nights are superb! And very well attended.. x
Reactions: Spicyminx and Steed99
S

Always a fantastic atmosphere. I'm sure its the diversity of people and the sheer open mindedness . It really is the people that make this night.
Reactions: Admin
You must log in or register to reply here.
Share:
Facebook Twitter WhatsApp Email Share Link
Top Bottom